In this video we visit Port Adelaide, a station described by the owner of Urban Rail Blog Robert Schwandl as "the ugliest new station built in recent years worldwide." Here we see a couple of Adelaide Metro 3000 & 3100 Class DMU's.

Port Adelaide is situated on the Outer Harbor line in Adelaide's northern suburbs, and appears to be one of the busiest stations on the line. Port Adelaide itself is a busy commercial and tourist area, home to shops, cafes, restaurants, markets and museums; including the National Railway Museum.

The current station dates from 2010 when the viaduct was refurbished, and I have to agree with Robert's assessment that its quite an ugly station. The problem is that most of Adelaide's new train stations share common design elements which includes the use of metal, sheet metal and perspex. Whilst basic these designs are generally pleasant and functional enough. The problem with Port Adelaide though is that it's situated on top of a viaduct, with tall fences being needed to stop people from climbing or throwing things over the edge. Unfortunately they've opted for tall sheet metal fencing.

Along with the other hard surfaces this gives the station a prison like appearance; a place where passengers are inmates being held for crimes against humanity including fare evasion and having feet on seats. It doesn't leave a positive impression to passengers. In my opinion Port Adelaide should have had its own unique design to reflect its unique characteristics. It doesn't need to be overly fancy, but it should be good enough to create a unique sense of place and to tell passengers that they're valued when using the public transport network, not to be treated as untrustworthy prisoners. The prison like architecture is also a complete mismatch to the historic nature of the viaduct.

Bowden station is a great example of good placemaking that should have happened at Port Adelaide. Bowden is still a fairly basic station but to reflect the fact it was built in a trench it has its own unique design, with painted surfaces, feature walls and extensive landscaping and sculptures to create a pleasant atmosphere for commuters. 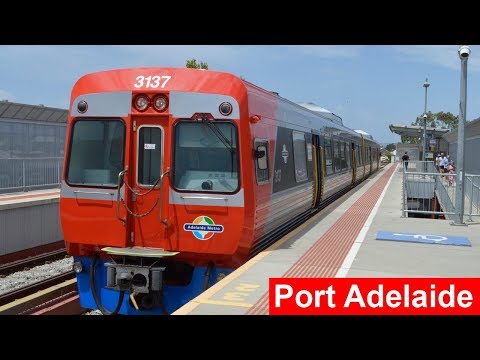 In this video we visit Port Adelaide, a station described by the owner of Urban Rail Blog Robert Schwandl as "the ugliest new station built in re...