Disney Sing-Along Songs is a series of videos on VHS, betamaxs, laserdiscs and DVDs with musical moments from various Disney films, TV shows and attractions. Lyrics for the songs are displayed on-screen with the Mickey Mouse icon as a "bouncing ball". Early releases open with a theme song introduction (written by Patrick DeRemer) containing footage featuring Professor Owl and his class, seen originally in 1953 in two Disney shorts, Melody and Toot, Whistle, Plunk, and Boom (voiced then by Bill Thompson). Professor Owl (now voiced by Corey Burton) hosts some of the videos, while either Ludwig Von Drake or Jiminy Cricket host others, and later volumes, as well as the two Christmas videos, did not have a host at all. The footage of Von Drake and Jiminy Cricket were taken from several television programs (including the Walt Disney anthology television series, and Mickey Mouse Club) featuring the characters in the 1950s and 1960s.

Issued beginning on December 23, 1986, there have been four distinct series. The 1st launched in 1986 with Zip-a-Dee-Doo-Dah, followed by five more volumes. The 2nd series began appearing in August 1990 with Under the Sea and Disneyland Fun, featuring a new design and reissued volumes labeled One (1) through Twelve (12) in North America (worldwide, volume numbers). The 3rd series, beginning in 1994 with Circle of Life, saw another new package design and the re-release of all previous volumes (excluding Fun with Music, repackaged as 101 Notes of Fun along with Hercules for the non-North American market). Around 1996 this series incorporated Mickey's Fun Songs repackaged as Sing-Along Songs (a three volume live-action set in the style of Disneyland Fun). Spanish language editions of some volumes were released (Disney Canta Con Nosotros). Some songs moved to newer volumes, newly remixed opening and closing songs appeared, and the final release in this format was Flik's Musical Adventure at Disney's Animal Kingdom on June 8, 1999. During the remixed opening and closing themes, the remixed opening was heard on Friend Like Me, Circle of Life, Honor to Us All, and Collection of All-Time Favorites, and the remixed closing was heard on the 1993 and 1994 editions of Heigh-Ho, as well as Friend Like Me, Circle of Life, and Collection of All-Time Favorites. This series abandoned any new volume numbers, included only sporadically on third series volumes. A special three volume set, Collection of All-Time Favorites, was released in 1997. There have been over 30 titles released to home video. Newly remastered editions began appearing in 2002 on Disney DVD, beginning with Very Merry Christmas Songs, featuring a new package design, bonus features, and some new songs. Some Disney DVD feature releases include individual songs as bonus features. Winnie-the-Pooh Sing a Song volumes are being incorporated into the Sing Along Songs series. The DVD series (4th series) features Sebastian the Crab (from The Little Mermaid) singing the theme song, replacing Professor Owl.
Видео добавлено 1 год назад пользователем dosakan 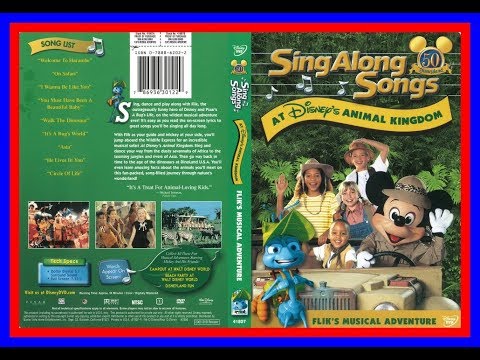